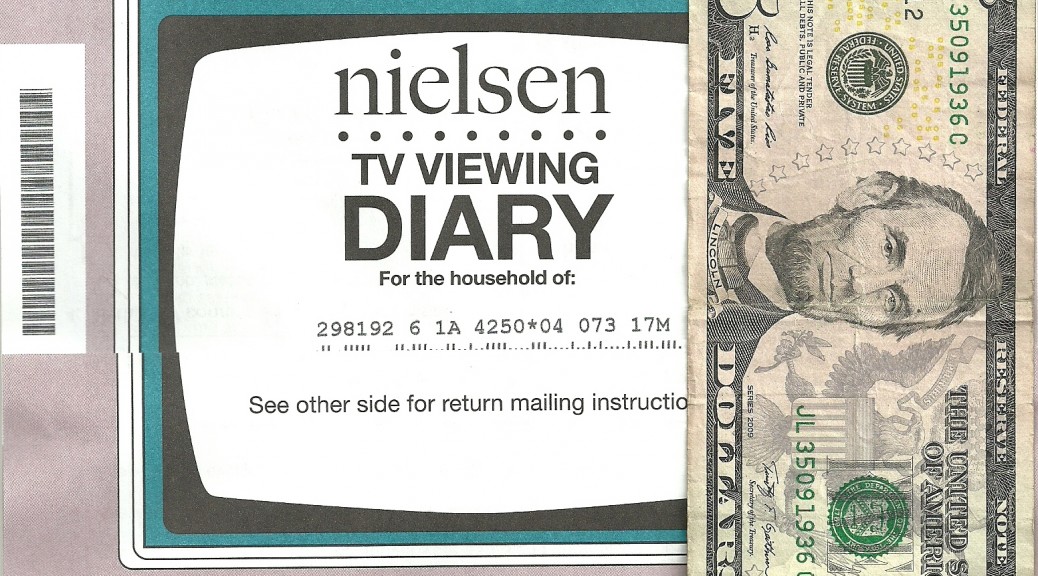 I was recently solicited to participate in a Nielsen household TV survey. They have a unique way of enticing participation. The first envelope has a lot of explanatory material and a request to participate, as well as–without explanation–$5 cash, a single five-dollar bill. I agreed to participate, so after a few weeks they sent me a second envelope with a “TV Viewing Diary” to be filled out in detail for two weeks; and again the cash–this time the envelope contained six five-dollar bills, $30 cash! I spent the fives on groceries, filled out the TV viewing diary (blank because I don’t watch), and took their TV survey. Now, like Pavlov’s dogs, I am expecting a thank you letter with more cash. I can’t wait to hear from Nielsen again!

At the end of the diary, Nielsen leaves space and asks you to “comment on TV in general.” This is my response:

Except for about two years in the middle, I haven’t had TV in my house since 2003 (for two years my roommates had one). At first I felt like I was missing something and like I didn’t know what was going on. After a few months, I no longer missed it and I gathered from conversations at work and with friends what was in the news and what was going on in various shows. After a few years, I started having the opinion that TV actually prevents people from really knowing what’s going on. I hear conversations about current shows and it’s all sensationalized fantasy.  People’s world view from the news is this chaotic, scary place, when really the world, for the most part, is fairly well-off, happy, and stable. When I see TV now, much of it is shocking and some of it is offensive. I do miss sports and ESPN. I watch

whenever I can! -Nathan Ruffing

One thought on “Nielsen Survey”